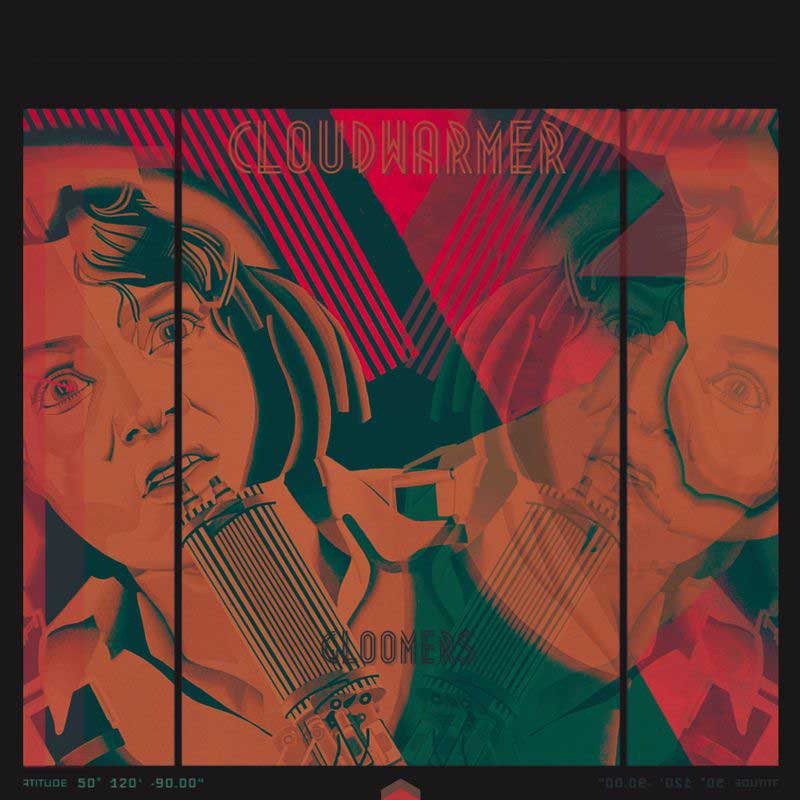 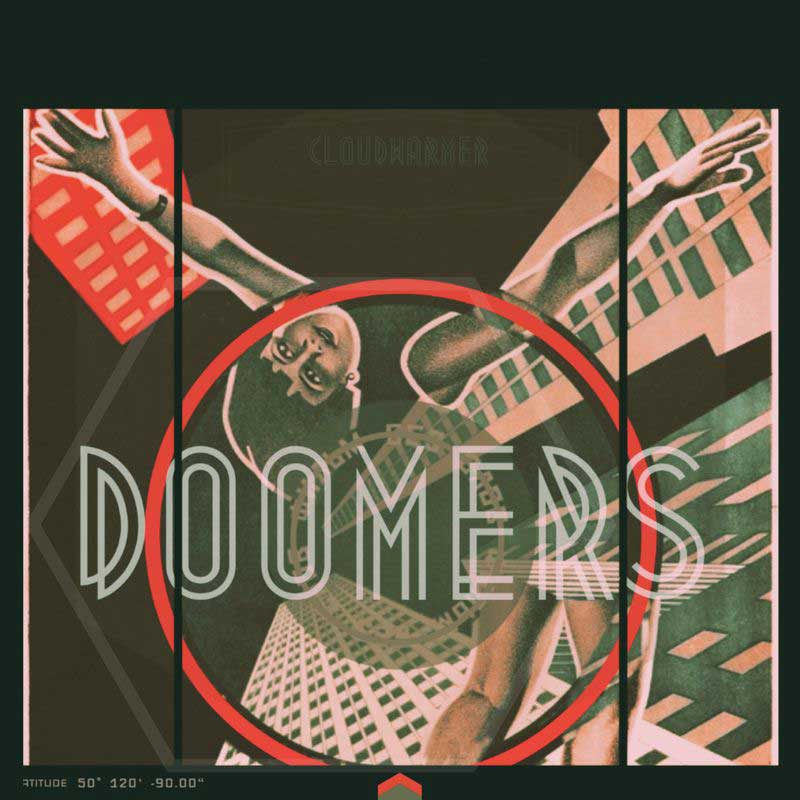 Tracklist / Doomers
01. Where Were You When England Won the 1984 World Cup?
02. In New York Wired Face on the Subway Burning Cigarette Holes in Arms
03. Lauren Qbert, Founding Father
04. An America Now Long Gone Except in Broken Down Dusty Greyhound Stations
05. Dana Scully, Bounty Hunter
06. Blue Lives Don’t Matter Now Do They?
07. Dan Bondildo, Employee of the Month
08. Eve Barlow, Freedom Fighter
09. Always Too Late To Rise Up
10. Quick Thrill at the Cost of Someone Else’s Demise
11. Sad Girl Autumn or Not Too Well
12. Tik Tok Noir
13. Flo Rogan, Beta Male Edge Lord
14. I Could See That Ruin
15. Jazz for the Disoriented
16. Where Were You When Ivanka Trump Solved the Climate Crisis?
17. Jamarr Mays, Train Conductor
18. Lofi Beats to Hang Yourself or Sleep To
19. Blacked Out in the Jersey Pine Barrens with Neal Cassady
20. Jesus Guns Ketamine
21. Nancy Reagan Onlyfans
22. I Haven’t Been Myself In So Long I Don’t Even Know What Myself Is Anymore

Tracklist / Gloomers
01. Where Were You When Michael Caine Cured Covid?
02. In Duluth Coal Tied to the Piano Wires of Love
03. Fashli Babbitt, Civil Rights Icon
04. I Was at the Enfield Poltergeist and You Weren’t
05. Fox Mulder, Ice Goth
06. Let’s Get Coffee and Cry Into the River
07. Ayn Rand Feeds at Night
08. Night Gallops Through the Drifts
09. Never Too Late To Give Up
10. 1994 Was My Best Year and Now I’m Proper Fucked
11. The Nightmarchers
12. Noreaster Demon Run
13. Wolf Blitzer, Malt Liquor Connoisseur
14. Blue Cold In Remembrance of Brett Zehner
15. Sixty Seconds To Detroit
16. Where Were You When Zack Henkel Won the Nobel Peace Prize?
17. You Should Be Home By Now
18. All Along the Data Center
19. Haunted By Phil Collins
20. Dead in the Laundromat Colonized by Capital One
21. I Woke Up In a Coffin Somewhere Around Tupelo
22. First Fall of the Tightrope Walker

Dirty, broken pavement, riddled with cracks and potholes. Narrow like a tight ravine. Dingy windows pitched way up. Fire escapes in disrepair. A neglected dumpster to hide behind, overflowing, no longer in service.

I’d had a month to choose my sentence, and during that time I was given conditional freedom. As long as I broke no laws, I was allowed to go as I pleased, a little black bead called the Regulator Lite was installed into the back of my neck to keep me steady. A parole unit came by once a week to draw blood and take hair samples, check my system for drugs the bead couldn’t detect.

I stayed with my mother. Never in her life had she seen me sit so still, show any concern for her or the rest of the family. No wringing of hands, squirming, fishing for money or favors. Even the pain from multiple back surgeries was not evident. I could tell she thought I’d been heavily drugged, brainwashed in the county jail, or perhaps lobotomized. She knew as much about the Regulator Lite as I did, and yet still couldn’t believe it. How could such a small device take away the disease that had wrecked her life? What exactly could it have been doing to keep me tame, quench my thirst for perpetual ruin?

For the first time ever, I could see that ruin. My mother kept a clean house, but it was small, remortgaged twice over. We sat in the kitchen, the most pleasant room in the house. Daylight filtered in through gauzy drapes and I had to shout for her to hear me. Her hearing aides were on the fritz and securDrones were constantly passing down the street. In the past year or so, her hair had turned white and stringy, and her eyes never relaxed, like she was always ready for someone to jump out at her. For years I’d known she’d wanted me dead. It would have been easier that way. Dead from overdose in a ditch or alley so she could finally stop worrying, finally have a simple, clean moment for herself. I’d made her life miserable even as a baby. My older sister liked to remind me I never slept unless I was held. Our mother, sick and on the brink of a nervous breakdown from sleep deprivation would send my sister in to pick me up, take a shift when she couldn’t stand or speak anymore. Apparently I cried and writhed in my crib so much I dug sores in my feet and bled all over the covers. My sister said she eventually trained me to sleep alone by pinching my arm anytime I cried. She came into my room and dug her nails into my skin until I stopped, and when I didn’t she’d dug further, until I bled and squealed and learned my lesson. That’s how they were able to sleep again.

Life in prison or a decade of servitude with the Regulator Max, and become a puppet for the state. Afterwards, assuming I survived, the Max would be exchanged for the Lite again, and then we’d all live happily ever after. Some ex-Maxxers off themselves after their sentence, others learn to live with the memory of their atrocities, or maybe they convince themselves they aren’t responsible. From what I’ve heard, they really aren’t, since the little black bead exerts complete control, puppeteering-style, as if you’re living a waking dream. Was that so different than addiction? So different from my compulsion for ruin? And yet, how often did it burn to think of the suffering I’d caused, the mess I’d made of my mother, compelled by powder on a spoon, liquid in a needle, a quick thrill at the cost of someone else’s demise?

The Regulator Lite had made me reflective, willing to go through old wounds and grapple with the notion of choice. I remember very clearly knowing it was wrong to play with matches at age five, but I still did it, setting fire to the kitchen while my mother screamed at my father upstairs. Fast-forward to my adolescent years, I recall thinking I might kill my sister by pushing her into a steep ravine, and I only pushed harder, savoring the physical strength I finally wielded over her. As a teenager, one of my favorite activities was lobbing rocks at cars from the nearby overpass. I’d facilitated a handful of wrecks, knowing and wishing for the worst possibilities. And of course I’ve killed people. Many addicts have, feeding their co-conspirers what they crave. During all of my reflecting, the Regulator Lite kept me calm, but deep below that veneer was a guilt and knowing that I was born wrong, that I gravitated towards ruin, that no bead could erase the cruelty imprinted on my DNA.
I spent three tender weeks with my mother, and although she never let her guard down, never believed it was truly me behaving like the son she wished she’d always had, she seemed to accept this version of me could exist and she’d made her peace about it. I had my final check-up with the parole unit the start of my fourth week, the squat flyer scanning me from head to toe, taking its samples, reminding me I had six days to decide my future. When it left, I sent a warning to every dealer I knew, saying I planned to make life very hard for them unless I was compensated. The Regulator Lite seemed confused by this behavior, which wasn’t strictly illegal, but was sending my cortisol levels through the roof. It kept me calm through most of it, which was the only reason I’d been able to pull it off.

Standing in the alley, a trickle of thrill mixed with fear cuts through the wall of calm permeated by the Regulator Lite. It’s working hard enough I can feel the heat of it on the back of my neck. My shirt is soaked with sweat, my knees shaking.
An unmarked van pulls into the alley and slowly proceeds down the cobblestones. I hadn’t told anyone good-bye, not even my mother. She would’ve known what it meant. Even squeezing her hand before I left had been a risk.

The van stops. The driver side door opens. A figure emerges, face covered, and they produce a weapon from their jacket.

The Regulator Lite finally understands what is happening. It switches from calming to panic, sending a jolt down my legs to try to get me to run. I merely fall on the cobblestones.

Next it switches to pain, thinking this is a better strategy, not knowing my life has been nothing but pain.

Sounds of footsteps approach as I writhe in the alley.

The Regulator finally switches to my vice, turns my cravings into a tower of desperate feeling and I scrabble to my hands and knees, start begging for a fix. This pleading overtakes me even as I know the little bead can neutralize any high, turn it into despair, put me to sleep if it wants to.

For once I can picture my mother smiling.

On a failli oublier le nouveau Anna of The North, c’est dommage

No Events were found.