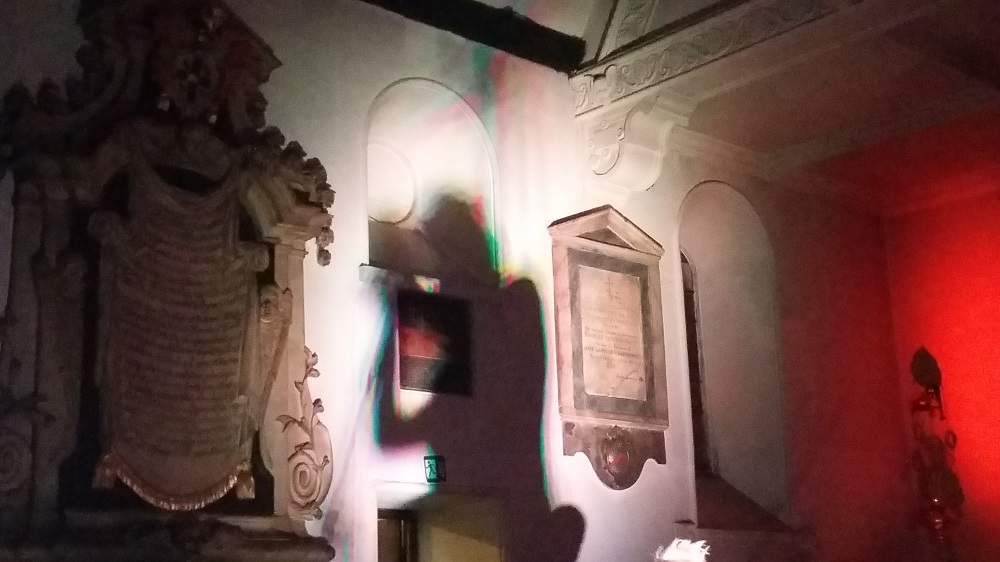 It was something like 7 years since Stephen Jones’ Babybird hadn’t been seen on stage ! So the (sold out) two-day residency at London Saint Pancras Old Church was a divine surprise for fans and lovers from all over Europe to be in communion with their (not so) old maverick hero, whitish hair, noble quiff and wittier than ever, a few months after he suffered from a heart attack and recovered as quickly as it gets with at least one wonderful full lenght LP named King of Nothing.

Babybird is immortal. Not just because of his You’re Gorgeous burden but because of the hundred songs he has delivered through his 25 year old career. Those who follow him since his lo-fi days know it too well : Stephen Jones is one of the most talented songwriter of his generation, a singer whose songs have provided the soundtrack of a few happy/sad normal lives through the years. To say the least, it was great fun/relief to see him live again. Stephen Jones’ voice hasn’t lost its magic : it is powerful, fully expressive and capable of wonderful modulations when alternating shouting and whispering in your ears. The secret in his songwriting has always been to articulate heroic grandiloquent moments, self-deprecating or ironical statements and romantic feelings. Stephen Jones inhabits a pop (dead) zone when Morrissey and Daniel Treacy used to cruise a few decades ago. He is now the only one of his kind, as invisible to the music business as he is important to his compadres. Saint Pancras Old Church was a perfect venue to host this show : intimate and of course sacred. Jesus in his shrine listened as carefully and full of love as the others. The prophet had received earlier on the assurance by the singer himself that the set would not include any reference to his girlfriend or any Stag Night Club he may ever been to. So the Church was safe and Jesus made the sound as perfect as anyone could dream a sound to be, clear and straight with the man’s old companions playing with all their tact and art. Rob is a clear-sounding drummer. Danny Lowe, Heads Off frontman, a discreet and generous bass player and Luke Scott (the guy is there from the band beginning and has cowritten a few songs in the past) an amazing guitarist who can adjust his game to almost any kind of song.

The singer couldn’t help on the wall notice a stone with his birth date from an ancient time and underline he stood all along just over the grave of some dead kid from the XVth century. Any Babybird show is a question of defying the frontman position and, for Stephen Jones, exposing his shyness and his life to the world. It was sometimes rather hard to see as he can’t help self-deprecate his own qualities or remarking how futile and useless all this is. But not today. Stephen Jones comes with a smile on this face. There are friends all around, probably a few familiar faces. No more than a 100 people. House is technically packed but could do with a few dozens more. He is glad to be here and still be alive. There is a big white light spot on his face which turns him into a ghost, projecting a large birdlike shadow on the alfresco wall on the right side of the church, so we can’t see that much how his face has aged or turned into something different.

Stephen Jones looks thinner, lighter than before, but his incoming into The Life is huge and epic. The setlist hasn’t changed that much in 7 years so he goes straight into the best collection of songs we have been exposed to in a long time from Drugtime, Failed Suicide Club to the always beautiful The Little Things. Black Flowers is a band favorite for a few years and they are plenty of tracks from Ex-Maniac here, which with There is Something Going On (the second album they did as a band) provides most of the setlist. Bad Old Man, The F-Word, All Men Are Evil are there. Oldies of course such as Cornershop (very well played and sung), Goodnight and of course You’re Gorgeous. This song is always a special moment for SJ as he regularly states the song has ruined his career. It may not be the case. The song has probably ruined his reputation as an indie act (as posh people have associated him to popular music since, and deprived him of any indie/britpop revival momentum) but that’s all the wrong it did. « We sound like a tribute version of a cover band doing a tribute version of a….. ». You got the idea. The song is as perfect as it ever was. Tongue in cheek and mischievious. Who cares if you can still hear it in the best supermarkets ?! You’re gorgeous did not destroy Babybird. It is just pop music which does not exist anymore. This kind of singing does not exist any longer. Even Bono and Ian Mc Culloch have stopped singing like this and composing this kind of songs.

Babybird is beautifully and historically anachronistic. It is all guitars, shalala and voices. And it is superb all along : Unloveable is a great song and we have all those standards which sparkle through the years. Take Me Back is the best song of the set. It is the best you’ll ever hear about man to female domestic violence. Ring a bell ? Anachronistic you say ! The church resonates to the threatening and desperate « Dead ! Dead !» from the finale. It gives shivers down the spine. I Love Her (from the long forgotten The Pleasures of Self Destruction, though his last « official circuit » LP), Back Together and Dead Bird Sings. Every little gem is there and it is amazing. People smile, dance religiously or mutter the words as if they still used to be 20-something little boys and girls in their student dens. There are a few teenagers who came along their dads. We feel young and old at the same time. There is a song for everyone. Winners or losers: as society asks, the question stays unresolved. We all hurt. Heartache, nostalgia, time passing, bruises, emotional coma. What else? Babybird reminds himself of the time he drank too much and snorted too much. Those times are gone for good. He seems less nostalgic about his former success than about being young. The man has trapped himself in this whole nostalgic act with a setlist from years past. We brought the cage to lock himself into and gave him the key. He keeps it at his belt and doesn’t complain that much he can’t escape. We are not even sure that’s all we wanted from him but it did us good to get it that way. Regrets prevent us to step into a new era.

There is only of song emerging from his Bandcamp universe. It is called In This Place of Love and it is the unnoticed masterpiece of the set. The delivery is great and it is the first time this song has ever been played live. Not sure many people have noticed it between the standards and hit singles, but this is the only part of Stephen Jones which is turned towards the future. It could be a bright or a dark one. What difference does it make? We are not sure he himself believes things could turn differently. Maybe next year or the following one. Each man carries his tragedy on his face. But we could have done with a few new songs ! Two hours out of time is probably the only help we’ll receive this year to help face our lives. This kind of music is mostly for « nearly-theres » and « never-will be’s ». Babybird is still standing. Proud and able. That’s all we’ll ever get from life and it is already too much for what we’ve done. Babybird is the King of Nothing… but us. Hallellujah ! We wish him best. There will be a new year, new songs, new loves. New death and new life.